Use TrackMan Numbers to Quickly PinPoint the Strike
Back in September at The Belfry whilst attending a TrackMan day Tom Davis of TaylorMade showed us this image of Rory McIlroy’s TrackMan data from a shot he had hit with driver….. As you can see Rory has tickled it out there 356 yards. Tom asked the question “How has Rory hit it so far?” 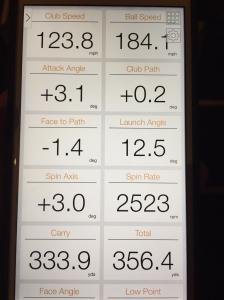 A few people said Club Speed. But Tom said look past the club speed what else has he done so well to get that ball out there 356 yards? One of the pros in the room put his hand up and said he must of struck it slightly high and out the toe in the clubs “HotSpot”. He argued this would reduce the spin and increase the launch and could explain the 356 yard bomb. Most of the room agreed.

Yes you read that correct, Rory hit it over 350 Yards slightly out of the neck! Hopefully by the end of the article you will be able to understand how we can tell Rory did in fact hit this shot out the heel, granted only slightly, by only looking at the TrackMan numbers. And the next time you have a TrackMan in front of you, you have a better understanding where the strike has come from.

“Face to Path” and “Spin Axis” Reveal All

*For the sake of this article any time I say centred strike presume the clubs centre of gravity is in the centre of the club head.
**Its important to note that this is article is specifically for shots hit with a Driver. I will explain why iron shots are different at the end.

Straight Shot from a Centred Strike

If your “Face to Path” comes in Zero and you strike the ball in the centre of the club face then we will also see a “Spin Axis” of zero. This golf ball will not have any curvature, so if it starts down the target line like the shot below, it will finish on the target line. 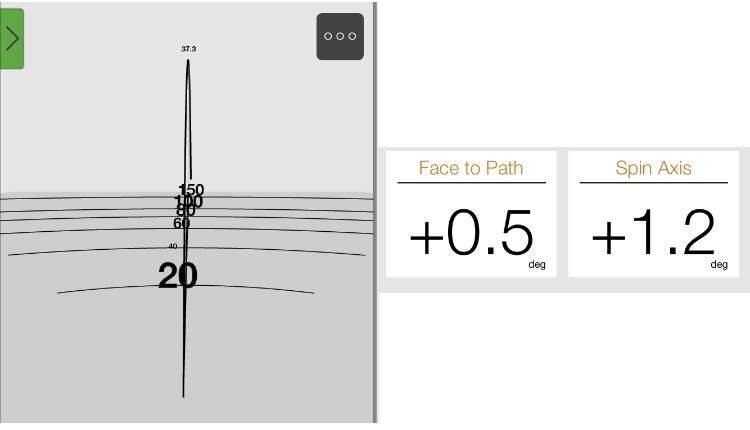 What a Centred Strike Will look like in Numbers

Spotting a centred strike is very simple. For each degree of “Face to Path” difference we should see a spin axis of 6. 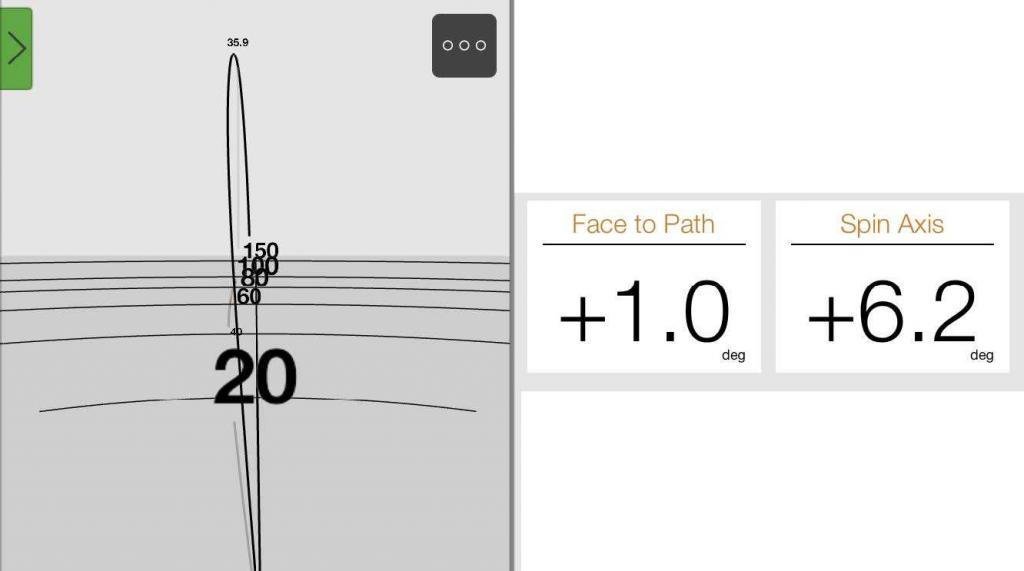 Numbers from an Off Centred Strike

Spotting an off centred strike is equally as simple. For each dimple the ball is struck out of the heel or toe we should see a spin axis of 6.

So we can quickly see that this shot below has a “Face to Path” of 0.0 but a “Spin Axis” of -1.8 so the ball must have been struck out of the toe. This was only a very fractional toe strike. 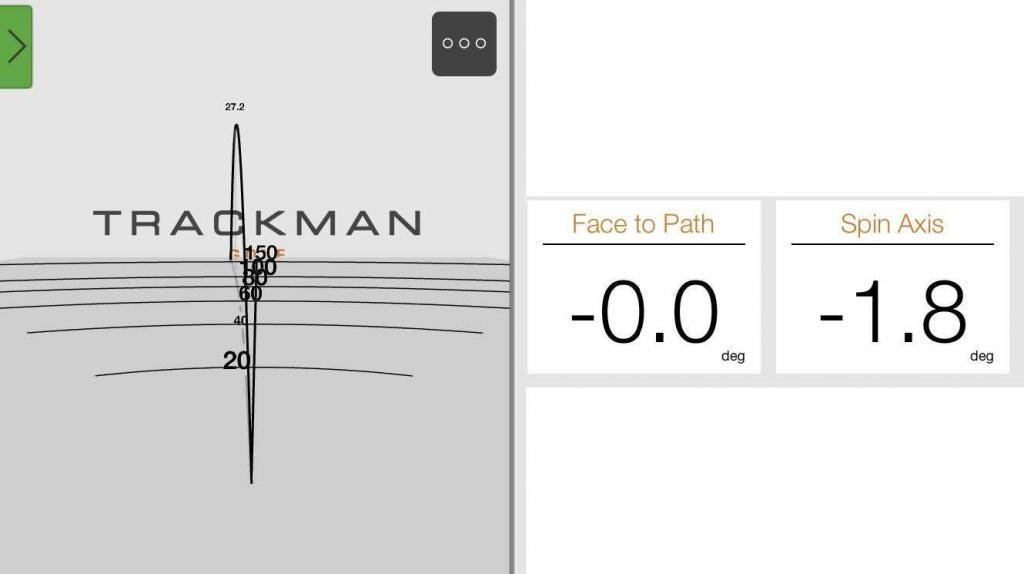 With this shot below you can see the “Face to Path” is only -1.7 so the “Spin Axis” should be around -10. So to get a spin axis of -35 we know he must have hit the ball a long way out of the toe. Around 4 dimples out the toe to be precise. 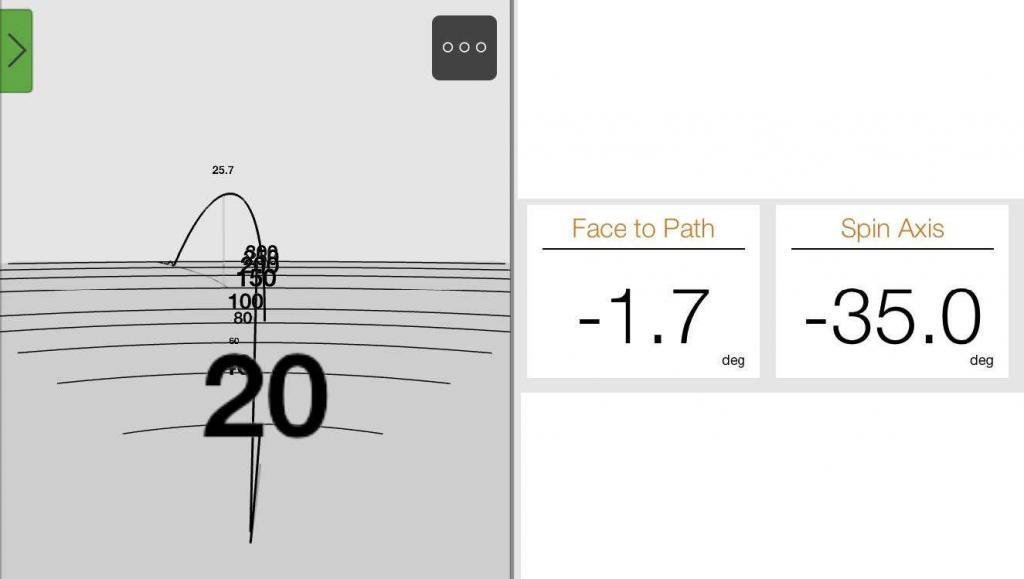 So Back to Rory’s Drive

Now you may feel ready to reassess Rory’s drive for your self. As we can see his Face to Path is -1.4 degrees. So we know if he caught this out the middle of the club face his Spin Axis should be around -8. The fact that his spin axis is actually +3 shows us it was a heel contact.

Ignorance Can Be Bliss

Using this newfound knowledge it can be easy to get bogged down over analysing the strike of every shot. For good shots like these below it doesn’t really matter whether the shots were fractionally toe or heel strikes. They are all off centre strikes but they have all gone straight and were good shots. 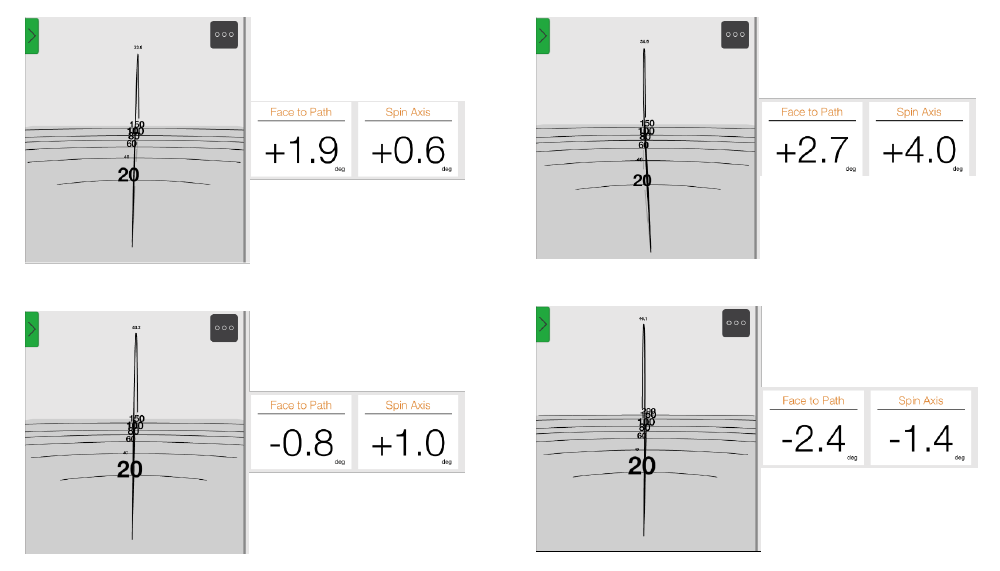 The Best Time to Check Strike Using this Method

I use this method when ever I see a lot of curvature in the shots. Whether it’s good shots curving onto the target or bad shots curving away from the target. This allows me to gauge whether the curve was caused by an off centre strike or from the path and face combination.

Here is a perfect example.
We have a shot that has excessive amount of curve to the right. A bog standard slice. It could be easy to presume that for a shot like this the face must be very open. A Face to Path of +6 perhaps. To fix this shot you may check for weak club face from grip or wrist positions or poor release patterns. 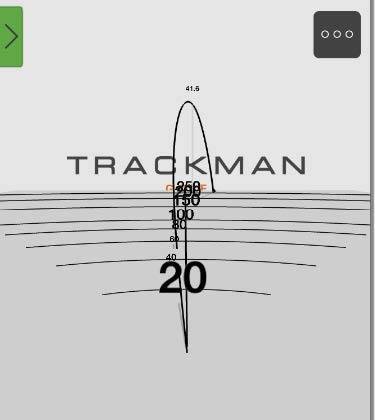 But with a quick check of strike location using Face to Path and Spin axis we can see the Face to Path was -1.6 degrees! The face is actually shut to the path for this shot, Spin Axis should be -10 if this shot were a centre strike. With the Spin Axis at +10.6 we know he has hit this considerably out of the heel of the club. 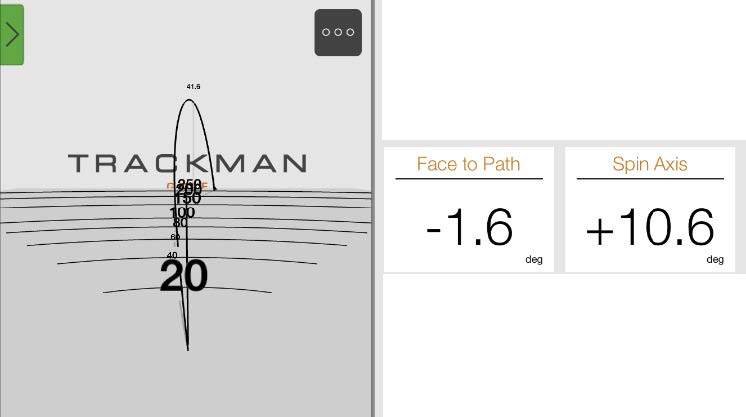 Can You Use This for Iron Shots as Well?

Yes, you can use this technique to predict strike with iron shots too. But it is not the same formula. This is due to the effect that Spin loft has on D-Plane. Below you can see this change with different clubs.
***This part of the article gets a little more mathematical now as we start to change the Spin Loft and resulting D-Plane.

As you can see with 10 degrees of spin loft (Driver and 3 Wood) each degree of face to path difference you will get a spin axis of 5.7 degrees (or 6 degree as I have rounded up to ? ). As spin loft increases through you irons the amount of spin axis created changes. This applies difference also applies to Spin Axis through off centre strike. As gear effect is greater with a driver than it is with a 7 iron. This can be seen below.